Have you ever wondered what Sanibel was like in its early years? To be honest, it hasn’t changed as drastically as most cities – but that’s the beauty of the island!

While the island’s homes, school and Post Office have upgraded to larger structures, you’ll notice the same “small-town” feel throughout the island. 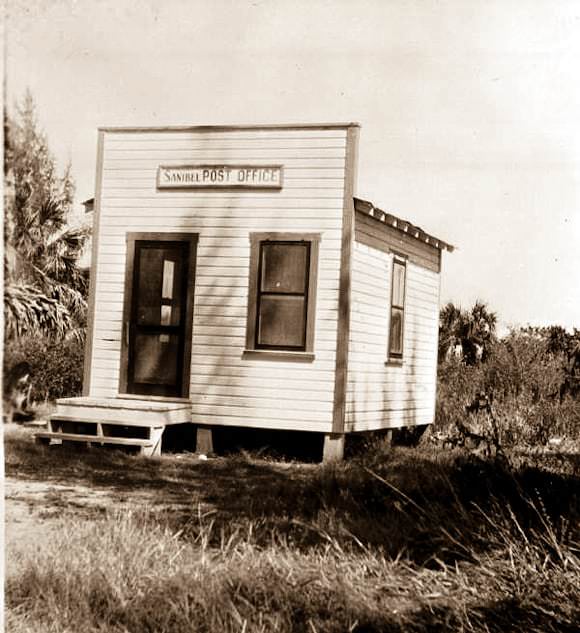 Much like you expected I’m sure. But this Post Office has a unique story to tell. In fact, the original “Post Office” was established in 1900 and was run from Will Reed’s boat dock on the San Carlos Bay where the mailboat would unload its stack from the mainland.

Mr. Reed’s front porch then served as the Sanibel’s mail house until 1926, when The Great Miami Hurricane tore across Southwest Florida. It was from the dock and home’s washed-up boards that the small Post Office building was built – complete with a mail drop box and American Flag waving out front.

You can find the old Post Office building in its original condition at the Sanibel Historical Museum and Village.

History buffs – this is your place to be! The village is a collection of old Sanibel homes, businesses, and buildings from the late 19th century – early 20th century. With a mission to “Preserve the Past and Enrich the Future,” the Sanibel Historical Museum and Village was founded in 1984, and includes seven historic buildings from around the island that have been moved to the museum grounds and restored to their original condition.

The Sanibel Historical Museum and Village is dedicated to the early pioneers of the island. It tells the stories of Sanibel Island families, such as “Uncle” Clarence Rutland and his wife Ruth, who were fondly regarded members of the island. The Historical Village website reports that Uncle Clarence came to Sanibel at the age of six and grew to be a “Jack-of-all-trades.” The Rutland House, built in 1913, was the first home moved the Sanibel Historical Museum and Village site in 1984.

Also known as the “Sanibel Packing Company,” the original store dates all the way back to 1899! Frank Bailey founded this general store to serve groceries and supplies to island residents and visitors. After the hurricane of 1926, the store was rebuilt with a stronger structure and farther back on the land. Much like today, the store was the center of activity, where islanders came to use the store’s telephone and telegraph links, cast their voting ballots and catch up on the latest “talk of the town.”

You can see the Bailey General Store featured at the Sanibel Historical Museum and Village.

“Back in the olden days…” as the Museum staff explain, there were a multiple packing houses on the island that would take the fresh-island produce, package them and send them up North. In true Sanibel fashion, islanders would help each other harvest crops, which served was the island’s main commerce in early years, before hurricane tidal surges ruined Sanibel’s soil for widespread farming.

While you’re exploring the Village, be sure to check out what I call “the little building that could!” Miss Charlotta’s Tea Room, was originally built by the Bailey brothers to serve as a gas station – but never ended up doing so. Following the hurricane, the building became a temporary store for Bailey’s while renovations were being done to the main store.

Charlotta Matthews, a relative of the Bailey brothers took over the store shortly after renovations were complete. And so, it became a popular island tea room. Last but not least, the building was finally converted into a residence in 1935, though it has been restored to its Tea Room pastime for display in the Historical Village.

The oldest building in the Sanibel Historical Museum and Village is the Sanibel School House, which dates back more than 120 years to 1896. The East Sanibel School for White Children started out on the corner of Bailey Road and Periwinkle Way, and later moved further up Periwinkle to provide a more centralized location. Starting as a one-room facility, the School House got a make over in 1932, which added another classroom and room for teaching grades one through eight.

Today, Sanibel is still home to only one school – The Sanibel School – a National Blue Ribbon School of Excellence. All of our kids have attended the Sanibel School at one point, our youngest still in attendance. We’re happy to have a school touted for educational excellence right in our backyard. You can read more about our area schools in our recent article: “Back to School on Sanibel & Captiva.”

If you’re fond of homes with the “cottage feel” you’ll love the three Sanibel cottages found in the Historical Village. From the pint-sized Caretakers’ Cottage to the massive Burnap Cottage, these buildings are certainly not short on character and charm.

The Caretakers’ Cottage tells the story of some of the island’s first African American settlers, who once took care of the Mayer family homes. The multi-purpose building served both the Shore Haven building, which is the Historical Museum’s main ticket building, and the Morning Glories Cottage, the home of Martin and Ada Mayer, which is also featured in the Village.

Both homes were built using a Sears and Roebuck house kit, a mail-order modern home program which sold 70,000-75,000 home kits between 1908-1940. Take for example the Morning Glories Cottage – this home was milled in New Jersey in 1925 and arrived on Sanibel by rail and barge the following year – in 30,000 pieces!

Speaking of morning glory… the Burnap Cottage was once used to hold Sunday services on Sanibel Island. The collapsible organ and stained glass windows are remnants of the homes early usage. Built in 1898, the cottage is the second oldest structure in the Historical Village, after the School House. It was used by retired Ohio businessman, Hiram Burnap, for years as a fishing retreat.

After reading this, it may feel like you’ve already seen everything the village has to offer, but trust me, the blog doesn’t do this historical gem justice. Walking through the village you feel as if you were back in “the olden days,” walking the dusty streets of Sanibel. Plus, each building is packed with island artifacts and knowledgeable docents have plenty of stories to share. If you haven’t yet been, this is a must see on your next visit to to Dunlap Road.